This probably the first time you heard about Minetest... or maybe not. But, let me tell you what is Minetest. 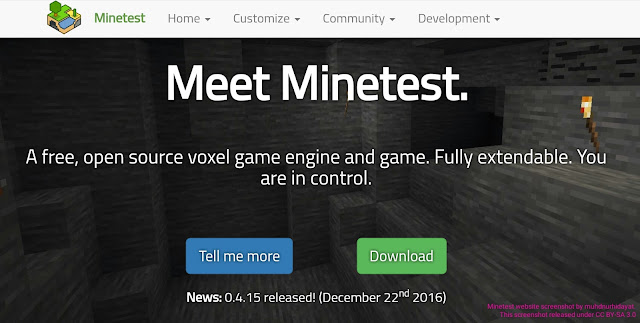 Minetest itself is a voxel game engine, carrying the default game with the same name. You could customize it to your need as the possible map generation is large. You can also create games, or install other games created by Minetest community, other than the default game.

To complement the gameplay, you can make or install mods which are written using the Lua language. The syntaxes are rather simple, you could create simple mod in a day, though more advanced mod would take long time to finish. I myself is currently making a few mods, though I will only release them when everything is fine.

From their website, Minetest is a near-infinite-world block sandbox game and a game engine, inspired by InfiniMiner, Minecraft, and the like. Minetest is available natively for Windows, OS X, GNU/Linux, Android, and FreeBSD. It is Free/Libre and Open Source Software, released under the LGPL 2.1 or later.

Since I love this engine & game so much, I decided to make separate website (blog) for it, rather than squeezing it into my personal website, you can return to my original website here.
Category: English Introduction

The dates & times on this website are Malaysia Standard Time (MST), UTC+8 unless stated otherwise.